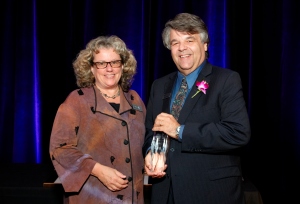 Honoured as a distinguished alumnist, Darryl Edwards was inducted to Western University’s “Wall of Fame” at the Don Wright Faculty of Music on Sept. 27th, 2013. He received the award from Dean of Music, Betty Anne Younker.

Prof. Darryl Edwards is an internationally lauded singing teacher, celebrated for his effectiveness and innovation. At the University of Toronto, Canada, with individuals in the voice studio and groups in the classroom,  he continually creates significant pathways for ideal learning experiences and performance outcomes. During 2016-2017 he is the voice adjudicator for the Canadian National Music Festival Finals in Edmonton, Alberta, and is returning to Brazil and China for teaching residencies and master classes in Rio de Janeiro, Shanghai, Chengdu, and Hong Kong. Dr. Edwards is the Artistic Director of the Centre for Opera Studies in Italy and COSA Canada (Centre for Opera Studies & Appreciation), which are dedicated to the development of emerging opera artists through “Extraordinary Opera Training!” At universities across Canada he is in regular demand for master class and lecture appearances. His voice teaching invitations include the Czech Republic (Charles University, Prague), New Zealand (University of Auckland),  England (Royal College of Music, London), Brazil (Federal University of Rio de Janeiro) and China (Central Conservatory, Beijing and the Xi’an Conservatory). He is a distinguished alumnist and “Wall of Fame” inductee of the Don Wright Faculty of Music at Western University: London, Canada.

A hallmark of Darryl’s abilities is his extraordinary nature in elevating young singers to their best, most skilled communicative selves, from the practice room to the performing stage. This is true for everyone in their own performing moment, whether it be in a local music festival class, a house or church concert, or an international concert, opera engagement or  competition.  For each singer he develops the specific performing opportunities and experiences that make all the difference from growing to knowing.

As a tenor, Darryl Edwards has appeared to critical acclaim in oratorio, recital, and opera in England, Germany, France,Italy, Corsica, the United States, and across Canada. His performances included appearances with Charles Dutoit and the Montreal Symphony Orchestra, Hans Graf and the Calgary Philharmonic, Noel Edison and the Toronto Mendelssohn Choir, Christian Kabitz and the Heidelberg Bach-Chor, and Franz-Paul Decker and the National Arts Centre Orchestra.